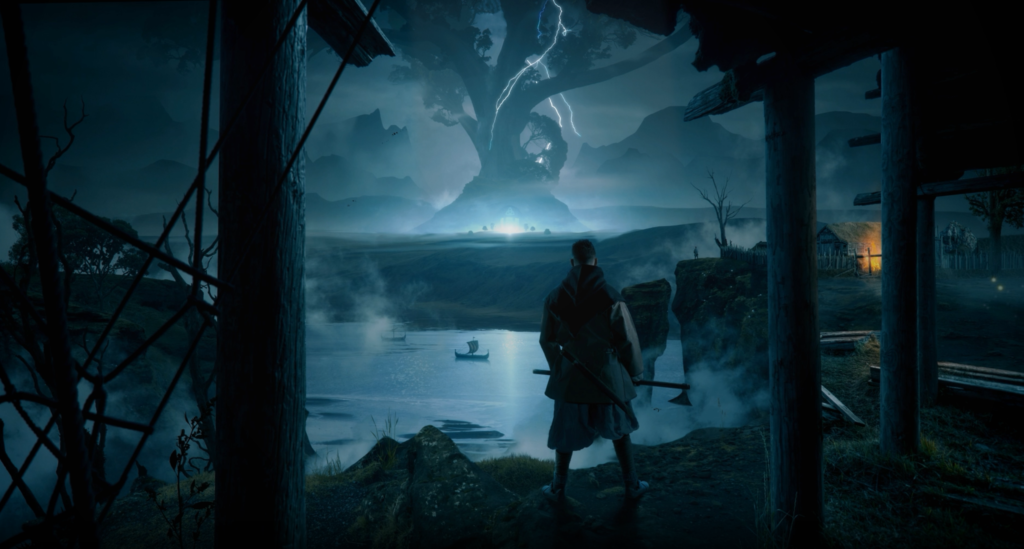 By now you’ve probably heard the team at GAME Credits is working  on Genesis, a new galaxy-spanning, multicreator metaverse game. We thought you might like to meet some of our team members and learn more about the project directly from them. We’re talking today with Matt Quirk, Head of Innovation, and Paul Barclay, CTO. In this interview transcript, you’ll get early insights about the project and the philosophies influencing this work.

We’ve heard of multiplayer gaming, of course. Help us understand what you mean by ‘multicreator.’ Are you saying the game is going to be built by multiple creators? Are the players also creators? Will you need to be a creator or a gamer to explore Genesis, or will there be open worlds?

Paul: We’re approaching Genesis from a totally different viewpoint from other metaverses and other games. What “multicreator” means is exactly that – many creators coming together to build a shared experience. Not all of these creators will be individuals. We expect indie game studios, contractors, and other creative groups to be heavily involved.

Even when an existing team is tackling a specific feature, the creator community will still be involved in guiding those teams to achieve the overall community vision for the game. And no, you won’t need to be a creator (or pay for anything) to play Genesis. It will be 100% free to play, plus you’ll be able to earn, level up, and sell NFTs, so it’s a true play-to-earn experience.

Matt: We are definitely pushing the boundaries here with both the way software and games have been developed previously, and the philosophy behind it. The process for “multicreator” is more akin to the dynamics of how Linux was developed, with the added benefit of a financial framework whereby one’s efforts can be rewarded, which in turn makes it more like Ethereum’s development approach.

From a philosophical standpoint we see a ton of value in the freedom and excitement around a bunch of people banding together and saying, “We love this game, but how much cooler would it be if we did it this way? Let’s start a new world.” Carrying on the Linux analogy and all of the flavors of Linux that developed over the years, in the same way Genesis seeks to do that with the metaverse, and create this incredible variety and diversity of worlds and games.

A lot of us hoped for and expected a much faster adoption of blockchain technology in traditional online gaming. What do you think has prevented the large game developers from incorporating blockchain in their existing systems? Why is now the right time to build a blockchain-based metaverse game?

Paul: Uncertainty around the legal standing of blockchain projects has been a factor; the US government hasn’t done the gaming industry any favours here. But the biggest blocker is that the benefits to those large developers just aren’t big enough. Where blockchain really comes into its own is empowering communities to create things that are otherwise impossible. That’s going to be the big impact of blockchain gaming over the next ten years, and we’re positioning ourselves to be at the front of that wave.

Matt: In addition to what Paul mentioned, I think there is uncertainty in the economics from a game developer perspective, while users simultaneously want more control of their purchases. The resulting secondary market adds additional complexity to consider where developers must become stewards of secondary market content. It’s delicate for developers, if you sell new content that undermines the value of old content (by reprinting similar content functionally), this can have a backlash. So game developers aren’t lining up to adopt blockchain tech with these risks in mind, making it more challenging to build a gaming blockchain platform.

We think the entire economic model whereby games make money has to be looked at. The lack of blockchain adoption by game developers and the increase in demand for user control creates an opportunity for new or existing game devs to innovate within this space. WAX has had a few good games on the chain, but has mainly been successful with collectibles. Enjin did great in communicating their multiverse capabilities of items shareable across games, but as a platform, still hasn’t taken off in terms of game developer adoption. Genesis is a game and community that tries to innovate by redefining the entire model for doing business, embracing decentralization, and giving users the control they want.

Paul, your past experience in game development at Wizards of the Coast will be a huge benefit  to the project. Because this will be community-driven and many decisions will be made through votes by token-holders, what are the unique challenges and opportunities you see when it comes to making a game like this?

Paul: Fundamentally, the game design process is the same for a community developed project as a centralized project. We come up with ideas, identify the best ones, develop them, and test to see if they work well. We’re just doing this on a massive scale, with thousands of people contributing. Guiding that diverse group of people is going to be the biggest challenge. We’ll need to help the community organize into teams, focused on different areas of development, and help the community mediate disagreements.

Governance votes are interesting here. For most things – even critically important things, they won’t be necessary, as there will already be consensus in the community. However, they’re very useful for the community to build support for new ideas. I’m excited to see how the community approaches the design and development of Genesis – I’m expecting some amazing results, and more than a few awesome surprises.

Matt, you’re working on some interesting ways to use smart contracts with the Genesis project. What are some applications of this technology you’d like to see available in early iterations of Genesis?

Matt: Smart contracts are a great way to automate transactions in a decentralized way and set up an economic framework for things to develop and scale. Economics are central to all that we do. As we don’t want to make a mistake, we spend a lot of time on this piece. It will be exciting to get the community involved and start hearing their feedback. We are looking to do a ton of DeFi incentives tied to NFT smart contracts to get people involved early.  Without going into all the details, world share ownership will enable many of these DeFi incentives.

NFTs appear to be on a collision course with the metaverse, both in practice, and in the media hype cycle. Where do you see the potential for NFT collectors to get involved in metaverse gaming? Do you expect Genesis to offer the ability to display or use any NFT?

Paul: I think NFT holders are already deeply involved in both metaverses and gaming. It’s a natural next step to blend those two. To really have a strong blend of metaverse, NFTs, and gaming, we’ll need to bring new creators into the space, and encourage those creators to deliver NFTs with real in-game functionality. That will create a new generation of gaming-focused NFT collectors. I don’t get to make the rules for what other NFTs can or can’t be used within Genesis – that’s the community’s job. But I expect that the community will want to allow any NFT to be used in Genesis.

Matt: Personally I’d like to see how NFTs that are attribute based (Cryptopunks, Meebits, etc) or generative will be used as game content and not just collected for their rarity distribution and hype. I think this is also a new opportunity for NFTs. People can take advantage of this incredible gaming ecosystem. We want people to get a bit radical here. We have gone radical with the scale of this universe. In a similar way, how NFTs can be used to express oneself to new heights and dimensions, both in what they can do from a gaming perspective and what they communicate of one’s creativity, vision and viewpoint.

We’ve seen a number of companies jumping into the metaverse space recently, even as some projects have struggled to get off the ground. When you see companies like Facebook announcing metaverse projects, how does that influence the strategy for GAME Credits and Genesis? Will all these metaverses work together? Is there room for so many projects? How do you plan to stand out from the crowd?

Paul: We looked at the whole space in great detail as we were building Genesis, and that’s why we decided to build a metaverse that was also a cohesive game. I think some metaverses will thrive, others will die, and some will be data mined, ad-infested hellholes (looking at you there, Facebook). Lots of companies are building metaverses that hold standalone gaming experiences – Facebook, Roblox, Sandbox, Decentraland, etc.. Even more companies are building standalone games with little to no customization or freedom. And there’s also a growing clutch of blockchain “games” that are really just nicely dressed DeFi farms.

What we’re building, nobody else is doing – a metaverse that’s gaming focused, not for profit, and community created isn’t aiming to compete with other metaverse projects. We’re also looking at a completely different timeframe – we expect Genesis to be thriving in 100 years time. Rather than competing in a market with other metaverses, what we’re doing is moving the goalposts, and saying, “This is what games should be for their players and communities.”

Matt: I think one also has to ask oneself the question as well, “Do I value more consuming what other people have created for me, or do I value the ability to shape my environment, experimentation, and sharing in that process with others?” All of these metaverses are going to give you a certain amount of control to varying degrees. With Facebook, you’ll have an interesting way to connect with people, but within their business model, which often involves trading your data for access to their system. I think with Decentraland and some of the existing blockchain metaverses, you have a really great initial metaverse, but it’s missing the gaming side and fun factor that brings people back.

Final question to help our community get to know you better. What do you do for fun these days?

Paul: This. Guiding Genesis from zero to launch is the most fun I’ve ever had at work, and I’ve worked on a ton of fun stuff for Star Wars, Harry Potter, Transformers, D&D, and Magic: The Gathering. Outside work (that doesn’t feel like work), it’s playing with my kids and seeing how they interact with the world.

Matt: Definitely have the same joys as Paul with watching my four boys grow, learn and play in the world. I am actually stocking up board games for us to play (hopefully they’ll be into them) as they get older. My latest acquisitions are Crokinole, Dune, and awaiting my Frosthaven kickstarter. Otherwise, personally I do my own art (I do oil paintings, sculpture, and learning graffiti and street art right now), mountain biking, frisbee golf (playing for 25 years and still haven’t gotten better), and travelling to places for good coffee.